A burrito filled with mac and cheese instead of rice, and topped with carnitas, salsa, and sour cream.

Mac and cheese burritos must be a thing, but for some reason I had never had one. I didn’t think much of this idea other than being a gimmick when I first thought of doing it, but after I made it, I realized its much more than that. The creamy mac and cheese added so much to this burrito! Normally the cheese is a background player in a burrito, but loading this one with mac and cheese brought it to the forefront.

I used Chipotle and Onion flavored Old Croc cheese in this mac and cheese recipe and the flavors and textures are what made the final mac and cheese so good. It was creamy, smokey, and spicy, without having to add any extra ingredients. Mix butter and flour to form a roux that will thicken the sauce. Add the milk, then the cheese. Pour the sauce on the pasta and toss to coat. Mac and cheese goes into the burrito first to form the base. Then the carnitas, beans, salsa, and sour cream. 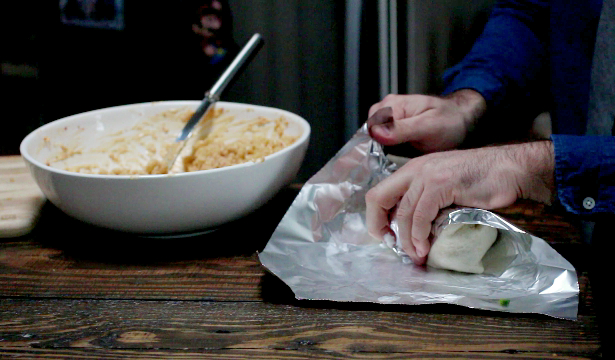 Make sure you use foil just like at the burrito shop. This will help keep your burrito intact. You could also put all the ingredients in a bowl instead if you prefer. This version tasted awesome, but the burrito version was my favorite. So creamy! This burrito was oozing flavor. After you roll it up, make sure to toast it in a pan for a few minutes on each side. This will warm it all up and add a little texture to the tortilla itself. 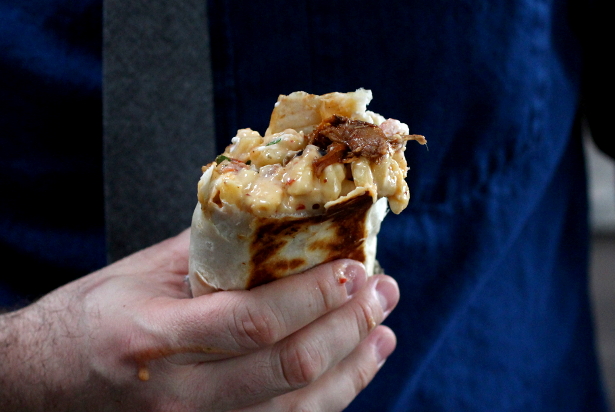