Everyone asks me for recipes to bring over to their friends holiday parties around this time of year, and I am happy to deliver. We all want something creative, new, and delicious to make, and this recipe hits all those points. I took the idea of a potato skin and a twice baked potato, and combined them in taco form!

You guys know I love mash-up recipes, and this one didn’t disappoint. The taco boat gets crispy almost like a potato skin would, but with a whole new texture. The flavors are familiar, but they are served in a new way that is perfect for people to grab and snack on at a party. Bake the potatoes and mash them up with butter, cheese, and sour cream. Bake the taco boats first for 10 minutes before filling them and baking them more. I tried piping some designs onto the boats but in the end it worked best when I filled them a little less and didn’t add a design. That’s because the bacon and chives go on top anyways so you don’t really see the piping. These are addictive little bites of potato magic in a soft shell.

These are great to put out as an appetizer cause you can make them ahead of time and then just pop them into the oven when people are arriving to the party. A little extra sour cream on the side never hurt anyone. 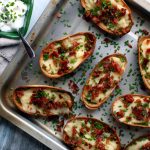