The thing is romesco sauce is already orange. I was looking at a romesco sauce in a photo and it made me think it would be fun to add pumpkin and really “Fall it up” with some mushrooms, brussel sprouts, and warming spices like cinnamon and nutmeg. I fallowed a fairly typical romesco recipe, but swapped out the tomato for pumpkin, and the almonds for pumpkin seeds. It obviously came out a little thicker than a traditional version, so I thinned it out with some almond milk. It went great on these chicken meatballs and fall veggies. Roast the pumpkin with the seeds, a bell pepper, habanero, and garlic. This is more pumpkin than actually went into the mixture. Once it is tender, add everything to a bowl or blender with some spices and vinegar and blend it up. The sauce was a great texture and would be awesome just served with some bread. 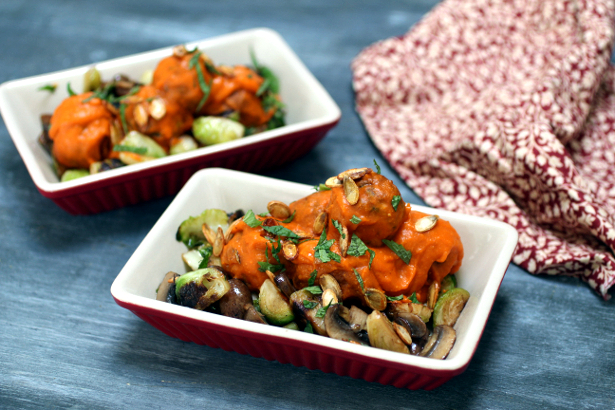 The meatballs were chicken, garlic, parm, mint, bread, cinnamon, and nutmeg. The veggies were just seasoned with salt and pepper and sauteed on super high heat. The flavors in this are just what you want to eat this time of year! Very savory and warming with a little tartness from the vinegar and a kick from the habanero.