This weekend I was on a cooking competition show and I made some carrots that went over pretty well.

I actually never wanted to be on a cooking reality show before, but always thought that this specific one would be something I might be good at. The whole thing, starting with the first email I received, has been an amazing experience in ways that I never expected. I still almost can’t believe that everything happened the way it happened. Thank you to everyone who tuned in, tweeted, snapped, and reached out to me over the past few days, it really means so much to me!

When I was trying to come up with this idea in the heat of the moment, I was actually thinking of the idea and flavors of chicken wings. It needed to be a little more upscale and a full dinner instead of a bar app, so I upgraded to the drumstick. The prune sauce replaced what would have been a sticky sweet wing sauce, and the yogurt raita what would have been ranch or blue cheese. I was heading to grab carrots because what goes with wings better than carrots, when I got the idea to blacken the carrots. The rest was hashtag trending history.

If you want more details about this dish or the parameters behind why I had to make it, you need to watch the episode.

I roasted the chicken for about 40 minutes, which is more time than I even had on the show. I guess this is more of the perfect version than the actual one I made. The carrots cooked in some olive oil with lots of salt for about 20 minutes. Getting a nice char on them is the most important part. 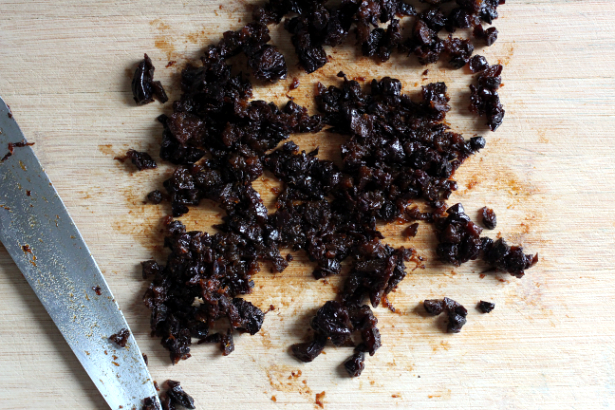 I had to use prunes in this recipe, so I chopped them up and made a sauce with balsamic vinegar to create a sweet and sour flavor.

A quick yogurt sauce freshens up the dish. This has chives, garlic, lemon, honey, salt, and pepper.

The quinoa also has chives and some red pepper flakes and olive oil. Put the quinoa down and then the carrots. This is also way prettier than I was able to make it in the pressure of the show environment. This dish has such a great balance. Hearty quinoa, tart yogurt sauce, and that sweet prune and balsamic sauce, and the super tender savory chicken.

The carrots though, like the judges said, completely steal the show. Since I was on the show I have made blackened carrots a few times, even on the grill, and they never disappoint.