Pasta Fagioli is my favorite soup. By far. When I get it at restaurants, it is much different than the version I grew up with, and when I see Mario and Giada make it on TV, it is definitely different from either of those. So what gives? Well after doing some research, I realized that this soup started as a meal of leftovers. Whatever you had that was about to go bad, throw in the soup. Pasta Fagioli really just means pasta and beans, so if it has those two things, I think you are on the right track. Here is my take on my grandmothers version. She gave the recipe to my mother a few years ago after years and years of hiding it, and we were all surprised it was so easy. I changed a few things to protect the family secrets...errrr I mean because I like it this way! I know first week of September is still pretty hot for most people, but that chill is seeping into the air. If you make this on the first chilly or rainy day, you will be extremely satisfied! 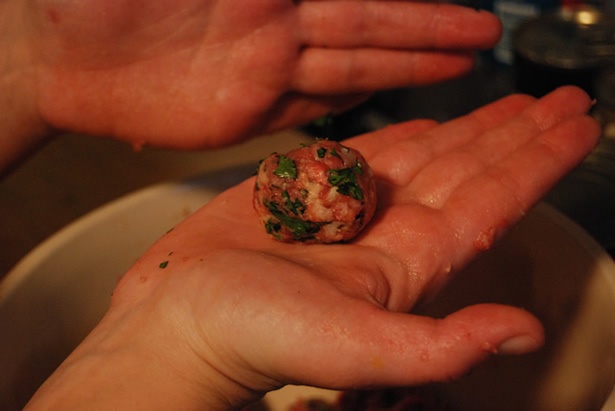 you remember how to make meatballs right? Well if you have some you made earlier in the freezer, this meal is that much easier! We didn't, but were able to make some really quick. 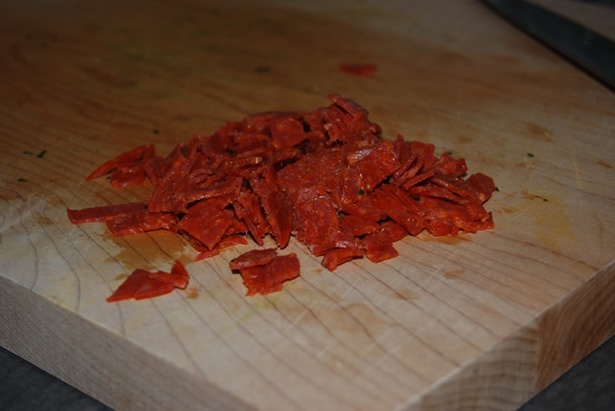 Fast forward! I added equal parts chicken stock and canned tomatoes that I crushed in my fingers. Then added the meatballs, parmesan, the parm rind, oregano, 2 bay leaves, and more pepper and crushed red pepper. I would have written this into the picture, but I thought it was pretty and didn't want to ruin it. Yes I said pretty. Cook the pasta separately, and put it in the bottom of the bowl. This is one of the few times when I cook pasta and don't put it with the sauce to cook for the last minute or two. This is because normally I want the 2 separate entities to become one as Mario says, but in this case I want the pasta to be separate and stand out from the soup. It is important to use little ring pastas. I like ditalini, but this is all they had at the store. It's pretty close. Click for Meatballs recipe. (*NOTE this is an older recipe that I didn't really transcribe perfectly with correct amounts, but part of the fun of this soup is making it your own!  Feel free to experiment and taste as you go.  Trust me with these ingredients in one big pot, it cant be bad.)